The Holland Flower Alliance moves to phase two of the Ideal Flowerbox project after a successful trial on the Nairobi, Africa to Amsterdam, Netherlands, route

Amsterdam Airport Schiphol is supporting the Holland Flower Alliance (HFA) as they work towards implementing the Ideal Flowerbox, a standardised box and pallet to make the shipment of flowers more efficient and sustainable. 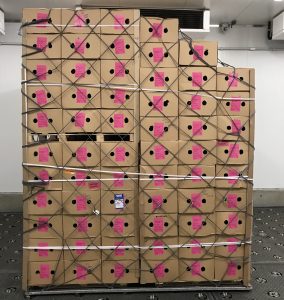 The HFA successfully completed a two-month trial on the Nairobi, Africa to Amsterdam, Netherlands route, which increased the weight on airline pallets of flower shipments by 15 per cent, resulting in a more efficient and sustainable process for transporting flowers – a key commodity for the economy of the Netherlands.

“We actively encourage innovation within the air cargo community, and we believe that collaboration with the HFA partners will continue to yield positive results for all stakeholders involved in the shipment of flowers.”

The Ideal Flowerbox project was launched to reduce unused space between flower boxes and pallets on shipments by introducing a standardised size, and to increase sustainability in the flower supply chain.

The project is funded by the HFA, which is an alliance between Amsterdam Airport Schiphol, KLM Cargo, and Royal FloraHolland.

“The initial trial was very successful with a 15 per cent increase of weight on airline pallets and boxes on the Nairobi to Amsterdam route, which demonstrates the value of collaboration between Amsterdam Airport Schiphol, KLM Cargo, and Royal FloraHolland,” said van der Meer.

“The results show that with the use of the Ideal Flowerbox we are able to optimise the aircraft’s load factor, which is beneficial for a sustainable and efficient operation.”

Pending a successful second phase of the trial, the HFA will evaluate the results and consider implementing the Ideal Flowerbox on more flower shipment routes in 2019.

Become part of a colourful journey

Our objective is to inspire the flower industry to share innovations and promote excellence throughout the floral supply chain.

We aim to encourage communication and collaboration between suppliers, carriers and trade bodies. Our alliance enables parties to talk to one another, share valuable experiences and enhance the quality of flower transportation logistics.

For more information, please get in touch at elinevandenberg@royalfloraholland.com

Together, we prolong the eternal beauty of flowers.